They say pets are a way to ward off loneliness. People who cannot share their feelings, emotions with other people do keep pets as their companions and get attached to them. Medical Reasons: It has become a growing trend these days to suggest a pet to come out of stress and handle depression.

Scorpions are predatory arachnids of the order Scorpiones. They have eight legs and are easily recognized by the pair of grasping pedipalps and the narrow, segmented tail, often carried in a characteristic forward curve over the back, ending with a venomous stinger

All known scorpion species possess venom and use it primarily to kill or paralyze their prey so that it can be eaten. In general, it is fast-acting, allowing for effective prey capture.
However, as a general rule, they will kill their prey with brute force if they can, as opposed to using venom.
Regardless of the venoms and stings, some persons have found love in scorpions, and do all possible to have them as pets.

9. Crocodiles
Crocodiles are large aquatic reptiles that live throughout the tropics in Africa, Asia, the Americas and Australia. 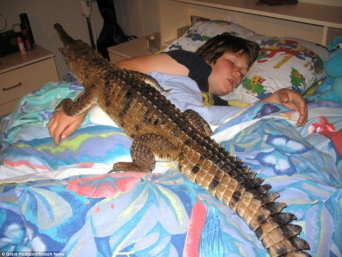 What a crocodile eats varies greatly with species, size and age. From the mostly fish-eating species, like the slender-snouted and freshwater crocodiles, to the larger species like the Nile crocodile and the saltwater crocodile that prey on large mammals, such as buffalo, deer and wild boar, diet shows great diversity.
Crocodiles are the most social of reptiles. Even though they do not form social groups, many species congregate in certain sections of rivers, tolerating each other at times of feeding and basking.
Most species are not highly territorial, with the exception of the saltwater crocodile, which is a highly territorial and aggressive species.